November 21, 2019
As anybody who ever reads what I write here surely knows, there's a new edition of the classic automotive combat game Car Wars in the offing, with the Kickstarter beginning in about a week as of this writing. I have very fond memories of playing it back in high school, and I'm looking forward to getting my hands on the new, faster playing version coming out soon.

One notable feature of the new version is that it'll contain plastic minis rather than the old cardboard counters we used back in the 80s. That's awesome, but there's an issue. Minis want painting, and my painting sucks. So, then, to get in some practice, I printed out a bunch of cars and weapons I got off Thingiverse. And I also tweaked a watchtower, attached a few TV cameras, and modified it to be a dice tower. Fun! 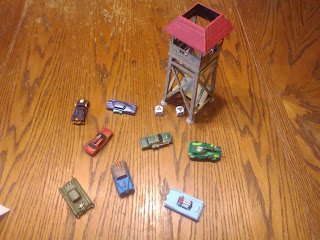 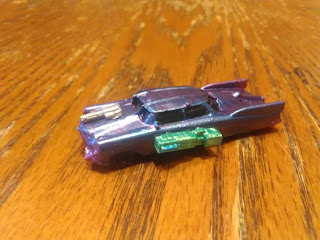 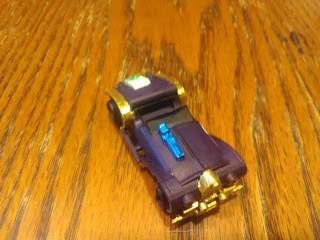 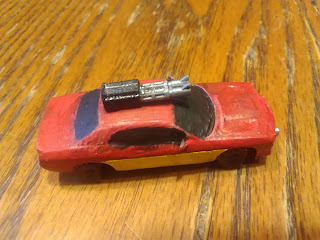 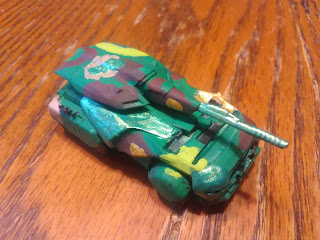 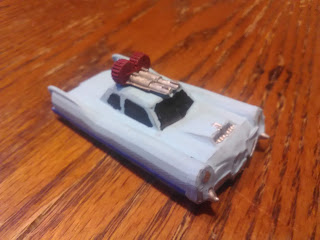 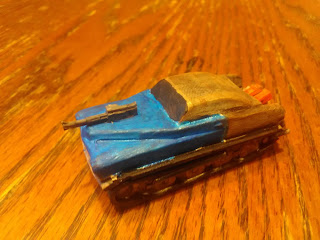 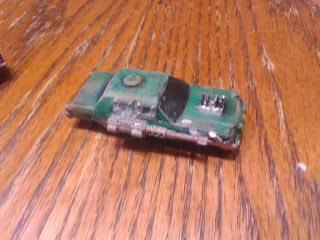 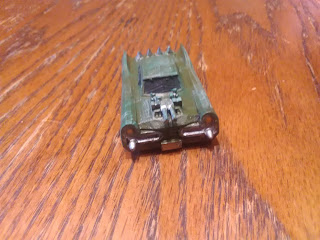 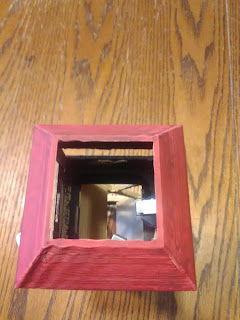 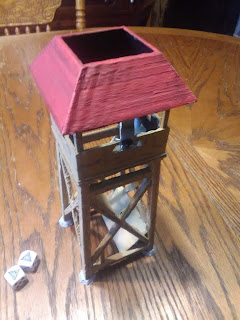 Of course, what I'm getting out of this is that once the game comes out, I'll probably leave the minis unpainted so that I don't mess them up.

December 05, 2019
As I've mentioned over on the forum, the Pyramid Dungeon Collection contains an article ("The Wellsprings of Creation") which fits most PDF-Pyramid and GURPS 4e fantasy locations and adventure locales not already spoken for (for example, nothing from Yrth is included) into a single game world. Here, for everybody's dining and dancing pleasure, is a list of what those are and which publications they're in.

January 07, 2019
I've remarked elsewhere on the sad demise of Pyramid. And I mentioned that my not writing as much for the third iteration of the magazine was a consequence of moving on to writing longer works. That's certainly a part of it, but another part was that the looser format of the second edition lent itself to a more eclectic, impulsive style of writing. Something which happened quite often is that I'd read a book, realize that there was a gaming angle on it, and write a brief article about it. "Atomic Zombies of the Pacific," for example, was the result of reading a book about recent exploration of the sunken ships of the Bikini Atoll and dashing off a lightweight piece on the topic before moving on. The tighter format of the newer Pyramid made that kind of thing more difficult (whatever I was reading at any given moment might not fit well with any theme Steven might come up with, though given his historical performance, I suppose that's deeply and unfairly undere…
1 comment
Read more

February 21, 2020
Yesterday saw the publication of my latest GURPS thing, a setting/location/framework for dungeon crawling campaigns (buy it here early and often). The idea behind it is to ignore the dungeon fantasy mission statement.

Do what, now? Well, let's review the introduction of GURPS Dungeon Fantasy 1: Adventurers, which sets out what DF is about:

Fantasy is an engaging genre, bursting with wonder and mystery. It offers worlds full of fascinating lands, dotted with great cities and populated by exotic cultures. All of this has a powerful resonance with any gamer familiar with myth, fairytales, and the fantasy epics of literature and film. For that, get GURPS Fantasy.

But something else resonates with nearly every gamer. That’s the thrill of taking a powerful, faux-medieval adventurer down into a cave – or a haunted forest, or a sinister stronghold – and seeing lots of monsters, killing them, and taking their treasure. For that, there’s GURPS Dungeon Fantasy.
So what does Cold Shard Mount…
Post a Comment
Read more