In his review of GURPS Action Adventure 1: Templars' Gold, Mailanka introduces the charming phrase "action documentaries" to describe adventures which also contain interesting educational content. You play a fun adventure, but you also learn stuff you didn't know before. And that's a marvelous idea, particularly for a game as frequently entangled in history and real world concerns as GURPS.

So naturally I started thinking about how one would write such a thing. To start with, it's probably best to attach such an adventure to some existing product line. For the 20th and early 21st century, that's clearly the Action line. While I wouldn't write it, there's room for such things around more obscure corners of WWI (the war in Africa, for example), some of the less European, more Asian parts of the Russian Revolution, events around the end of the Qing dynasty, the settlement of WWII (The Third Man or intrigue around landing Trieste as part of Italy as an adventure, for example), never-ending fun and games around Kashmir, decolonization struggles in Africa, and on and on and on. 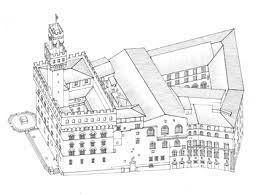 But I'm not the guy to write those. My interests run somewhat deeper back in time, which is a bit problematic. There's GURPS Historical Adventures line to tag things with. There are, though, hot spots, and GURPS Renaissance Venice: Spies of Venice points the way to how fact-heavy adventures might be labeled. For example, I can imagine GURPS Renaissance Florence: Pazzi in the Palace set around the Pazzi conspiracy and the activities of Medici allies at the time. The adventure would be part location, providing detailed plans and descriptions of the Palazzo Vecchio, and part adventure, challenging adventurers to carefully maneuver Pazzi supporters into a couple of rooms so that they can be locked in and held before word gets out that the attempt to assassinate Lorenzo has failed and they run for the hills. It's more focused than a full Hot Spot, and has the reusable content of a Location (into which category such an adventure would nearly fall), but it's also got something quite concrete to do. I've already got commitments and prospects stretching into the New Year so that's not the kind of thing I'm likely to take up soon, but it bears thinking about.

December 22, 2021
A few days ago, I dropped this random gag:   I shall make a character for an RPG who has powers related to artistic creativity, but instead of music and song, they come from arranging cheeses and cured meats. A charcuterie bard. — Turhan's Bey Company (@turhansbeycmpny) December 21, 2021   But then I remembered that there's absolutely precedent for food-based magic:  So, then, obviously we can have food-based bards in GURPS, right? The best approach I see is modifying the Enthrallment skills (p. B191). However, rather than requiring Public Speaking at 12+ as a prerequisite, a charcuterie bard requires Cooking and Professional Skill (Food Stylist) at 12+; see Ferrous Metal Food Fighting Guy for a bit on the latter. The skills are used by preparing and feeding an audience with tasty, tasty foods. The elements of food in question cost a minimum of 1% of COL per target, though higher quality ingredients provide a bonus (use costs and reaction bonuses for styling, GURPS Low-Tech
1 comment
Read more

The Book of Weird

August 18, 2022
Some time ago, I wrote about one of my early significant influences, the Judges' Guild Ready Ref Sheets . But recently I was reminded of an even earlier influence, The Book of Weird , by Barbara Ninde Byfield. Or, to give it its full title as it appears on the cover: The Book of Weird, Being a Most Desirable Lexicon of The Fantastical, Wherein Kings & Dragons, Trolls & Vampires, to say nothing of Elves & Gnomes, Queens, Knaves & Werewolves are made Manifest, & many, many further Revelations of The Mystical Order of Things are brought to light.   But yeah, The Book of Weird is much easier to type .   The book has had a somewhat complicated publishing history. It was initially published in 1967 under the title The Glass Harmonica . There being but a single passing mention of that instrument in the book, it was reissued in 1973 under the title given here in a large (9x11-ish) format, and reprinted yet again in a somewhat smaller format in 1994, which happens to b
2 comments
Read more