A few days ago, I dropped this random gag:

I shall make a character for an RPG who has powers related to artistic creativity, but instead of music and song, they come from arranging cheeses and cured meats.

But then I remembered that there's absolutely precedent for food-based magic: 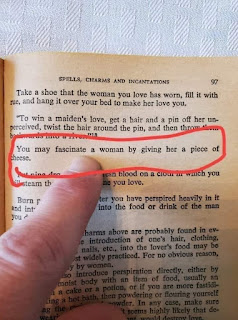 So, then, obviously we can have food-based bards in GURPS, right? The best approach I see is modifying the Enthrallment skills (p. B191). However, rather than requiring Public Speaking at 12+ as a prerequisite, a charcuterie bard requires Cooking and Professional Skill (Food Stylist) at 12+; see Ferrous Metal Food Fighting Guy for a bit on the latter. The skills are used by preparing and feeding an audience with tasty, tasty foods. The elements of food in question cost a minimum of 1% of COL per target, though higher quality ingredients provide a bonus (use costs and reaction bonuses for styling, GURPS Low-Tech, p. 14). Replace the initial roll against Public Speaking to engage the audience with a roll against Professional Skill (Food Stylist), because presentation is key.

Gwythaint said…
a Charcuterie Bard would probably have Dungeon Butcher from DF 19 and Prepare monster recipies from DF 15
December 26, 2021 at 12:07 PM

August 30, 2021
In his review of GURPS Action Adventure 1: Templars' Gold, Mailanka introduces the charming phrase "action documentaries" to describe adventures which also contain interesting educational content. You play a fun adventure, but you also learn stuff you didn't know before. And that's a marvelous idea, particularly for a game as frequently entangled in history and real world concerns as GURPS . So naturally I started thinking about how one would write such a thing. To start with, it's probably best to attach such an adventure to some existing product line. For the 20th and early 21st century, that's clearly the Action line. While I wouldn't write it, there's room for such things around more obscure corners of WWI (the war in Africa, for example), some of the less European, more Asian parts of the Russian Revolution, events around the end of the Qing dynasty, the settlement of WWII ( The Third Man or intrigue around landing Trieste as part of Italy
Post a Comment
Read more

November 13, 2013
(This is something I wrote up some years back. I'm putting it here so I can find it more easily when I want to. Though it's rather silly, it's also where I came up with the idea of high-quality materials which don't provide a bonus to the craftsman's skill, but do add to the margin of success, a mechanism which later appeared in the crafting rules in GURPS Low-Tech Companion 3 .) One of the things not to be found in GURPS 4e is extensive rules for competitive cooking. If two cooks of steely resolve rise up to face one another across a cooking coliseum, the GM can only fall back on hand-waving and contests of skill. This article fills that much-needed gap. GURPS chefs can now stage furious contests wherein they construct fanciful dishes, the more elaborate the better, and prove whose cooking rules the day. To the kitchen! Procedure These rules provide guidance for attempting to cook complex dishes and comparing their quality when the cooking is done. A che
1 comment
Read more