The Book of Weird

Some time ago, I wrote about one of my early significant influences, the Judges' Guild Ready Ref Sheets. But recently I was reminded of an even earlier influence, The Book of Weird, by Barbara Ninde Byfield. Or, to give it its full title as it appears on the cover: The Book of Weird, Being a Most Desirable Lexicon of The Fantastical, Wherein Kings & Dragons, Trolls & Vampires, to say nothing of Elves & Gnomes, Queens, Knaves & Werewolves are made Manifest, & many, many further Revelations of The Mystical Order of Things are brought to light. 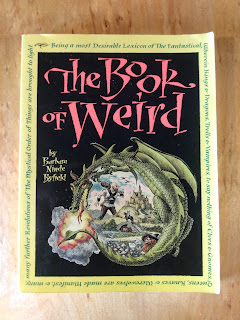 But yeah, The Book of Weird is much easier to type.

The book has had a somewhat complicated publishing history. It was initially published in 1967 under the title The Glass Harmonica. There being but a single passing mention of that instrument in the book, it was reissued in 1973 under the title given here in a large (9x11-ish) format, and reprinted yet again in a somewhat smaller format in 1994, which happens to be the version I have, though I first read it in the 1973 form.

I don't remember the exact year I first ran into it. It was likely some time in the mid-70s, definitely during some summer enrichment program for gifted children at UT. I was in some unit about fairy tales, and the woman running it ran a copy of the book past me. It was instantly captivating.

The book is set up as a sort of encyclopedia or dictionary of tropes from fairy tales, fantasy (as it existed at the time), Gothic and historical romance, and related genres. While the format is that of an academic work, the tone is often that of an advice column or etiquette guide. It's less a comprehensive guide to topics and more a batch of practical information on helping you understand a world you're already more or less familiar with, cluing you in to important distinctions, diagnostic traits of similar entities, rules which are inevitably followed, and loopholes to help you deal with it all. The page on burial alive, for example, distinguishes between intentional and unintentional burial, suggests the possibility of secret doors in certain specific contexts, points out potential sources of food and water, and recommends that, if you are going to die, you take care not to kill all the spiders so that years hence your skeleton will be found covered with picturesque cobwebs. It is, basically, a work composed entirely of charming, whimsical tidbits and asides.

So what does this have to do with me and gaming? This is one of the earliest instances I can think of at the moment of a style of world-building I'm very fond of. Rather than providing systematic descriptions of the world it describes with taxonomies and relationships spelled out in an easy-to-understand map, The Book of Weird works by providing a thick jumble of detail. It lets you know a great deal about a world, but it raises questions without answering them and leaves vast amounts of room for the unknown and the possible. And that, if you're thinking about building a game world where players will be running around and messing with stuff, is great.

Gwythaint said…
from a brief conversation with Zeb Cook, the book was on deck when the Monster Manual was written.
August 21, 2022 at 1:47 PM

Umbriel said…
I received this book as a gift from a friend of my mother right about when it was published under the Book of Weird title. I didn't really know what to make of it, and it sat on my bookshelf for a couple years until a 7th grade friend introduced me to D&D. It became a valued resource thereafter.
August 26, 2022 at 11:26 PM

December 22, 2021
A few days ago, I dropped this random gag:   I shall make a character for an RPG who has powers related to artistic creativity, but instead of music and song, they come from arranging cheeses and cured meats. A charcuterie bard. — Turhan's Bey Company (@turhansbeycmpny) December 21, 2021   But then I remembered that there's absolutely precedent for food-based magic:  So, then, obviously we can have food-based bards in GURPS, right? The best approach I see is modifying the Enthrallment skills (p. B191). However, rather than requiring Public Speaking at 12+ as a prerequisite, a charcuterie bard requires Cooking and Professional Skill (Food Stylist) at 12+; see Ferrous Metal Food Fighting Guy for a bit on the latter. The skills are used by preparing and feeding an audience with tasty, tasty foods. The elements of food in question cost a minimum of 1% of COL per target, though higher quality ingredients provide a bonus (use costs and reaction bonuses for styling, GURPS Low-Tech
1 comment
Read more

August 30, 2021
In his review of GURPS Action Adventure 1: Templars' Gold, Mailanka introduces the charming phrase "action documentaries" to describe adventures which also contain interesting educational content. You play a fun adventure, but you also learn stuff you didn't know before. And that's a marvelous idea, particularly for a game as frequently entangled in history and real world concerns as GURPS . So naturally I started thinking about how one would write such a thing. To start with, it's probably best to attach such an adventure to some existing product line. For the 20th and early 21st century, that's clearly the Action line. While I wouldn't write it, there's room for such things around more obscure corners of WWI (the war in Africa, for example), some of the less European, more Asian parts of the Russian Revolution, events around the end of the Qing dynasty, the settlement of WWII ( The Third Man or intrigue around landing Trieste as part of Italy
Post a Comment
Read more